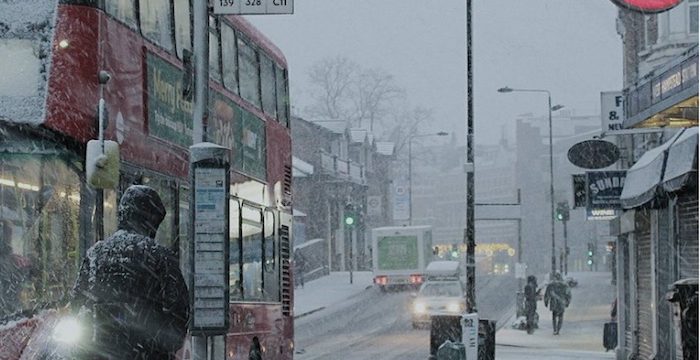 It snowed! You can always rely on the Wet Fish for an appropriate tweet.

We took a closer look at the redevelopment of Gondar Gardens into luxury retirement flats (including indoor swimming pool and chauffeur-driven cars) but ‘can’t afford’ any affordable housing. S-e-r-i-o-u-s-l-y?

Time for another Insight in West Hampstead; this time we popped into the Mill Lane Barbers to meet Prod. 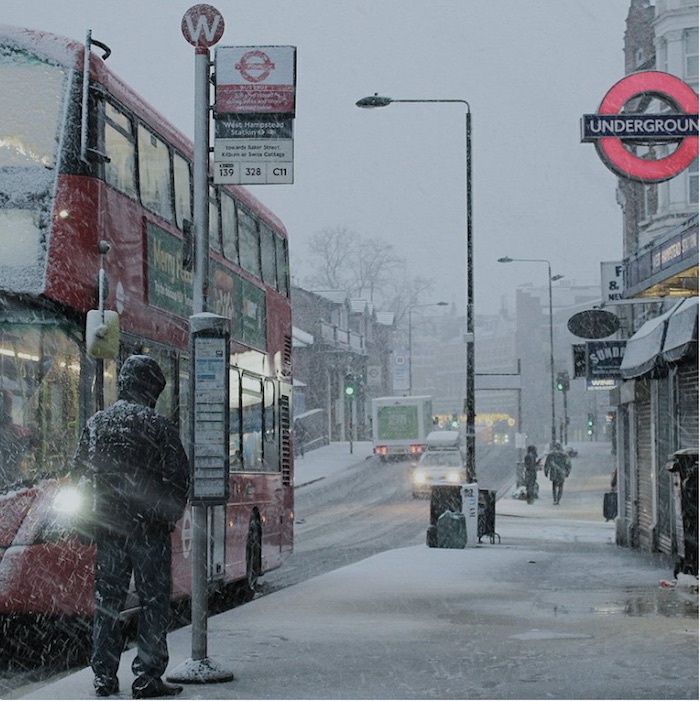 Aaah – West Hampstead in the snow. Pics were taken by Pennygrinder (and there are more if you click the link)

No sooner had we published our profile of Prod (who is originally Greek Cypriot) than on Wednesday West End Lane was over-run by Nicosia Apeol fans who stopped on their way to Wembley where their team was playing Spurs. Heavy police presence, lots of beer was drunk (Christmas came early for the Alice House) and chanting.

West End Lane reopened on Monday evening after the burst water main was repaired. But quite a few locals enjoying the quite traffic-free atmosphere asked if it could be more permanent.

Things seem to have quietened down on the moped-theft fronts but alas there was an attempted robbery at the tube station on Tuesday. *Keep vigilant*

An Albanian drugs gang was sentenced to over 44 years in prison after being arrested in an (unspecified) ‘West Hampstead’ restaurant.

It was the NDF meeting – it was well attended and some really good discussion on planning issues. If you care about this sort of thing, it’s worth coming along. The next meeting will be the AGM.

This poor local can’t bury her cat. It was killed in an accident and at the behest of a neighbour Veolia collected it, but can’t now find it.

Boris made his trip to Tehran – there were a number of items discussed but Nazanin’s case was high up the agenda.

Last Tuesday, friends, family and supporters of Nazanin were outside 10 Downing Street singing carols (quite tunefully thanks to Richard’s family coming from Wales).

This week saw the latest Friends of West Hampstead Library (FoWHL) event; two thesps for the price of one as Jim Carter interviewed Derek Jacobi. It sounded like it was another really good evening.

If you missed it (and many did) there is another opportunity as Jim Carter is organising two fundraising evenings for the Tricycle; Monday 19th Feb in conversation with Derek Jacobi + Kenneth Branagh and another one with Emma Thompson + Imelda Staunton (Sun 25th Feb – this one is sold out already).

Looking for a West Hampstead present for Christmas? Doris Lessing’s Nobel Prize medal is coming up for auction, the bidding starting at £250,000. If that is a bit high, we’ll be doing a rundown of local present ideas in a *slightly* cheaper price-range.

The head chef to the Italian ambassador was cooking up a storm at Scavolini in this sponsored post.

We did a round up of things to do in December, as usual, there is quite a lot.

We think this tweet and the subsequent chain is, well, barking mad. But it’s got 1.8k likes!

**Breaking news as it happens, live from North London** We have just been asked if we stock books 'for dogs'. Us: 'Do you mean for dog owners?' 'No, the dogs themselves'